Recently acquired, I believe this tiny coin to be one of the first emissions of the Ionian city of Magnesia. While the coin dealer presumed the fraction to have originated in Olynthos in Makedonia, the obverse has a strong connection to the later Magnesian coins, depicting an armed horseman attacking. Wheihing 1,22 grams, the fraction might be considers as a Phokaian standard Diobol.The obverse shows a well built man on the right, standing in a frontal position, leading a frontal standing horse on the left. 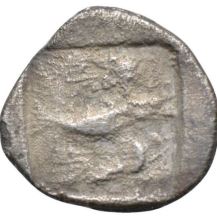 On the reverse we find the flying eagle, apparently the heraldic animal on early Magnesian coins (just compare the various eagle and eagle-head depictions on the Themistokles coins), as a symbol for Zeus. Beyond the eagles head might appear the rest of the coins legend, but the letter is far to worn to be identified. Only one similar Obol (0,88 grams) was sold at CNG, showing Leukippos pulling his horse right even stronger (www.cngcoins.com/Coin.aspx?CoinID=84501). The muscular chest and the strong calves are remarkable and clearly characterize the person as a (mythical) hero. Both nominals must be parts of an early series of Magnesian fraction, for stylistic reasons issued by the Polis even before Themistokles takeover (soon after 470 BC).

In my opinion, the man leading the horse – in association with the eagle as the Magnesian emblem – depicts Leukippos, the mythical founder of Magnesia. First of all, he bears a speaking name: Leukippos consists of the two components Λευκὴ (leuke, „white“), and Ἵππος (Hippos, „horse“), meaning „the one/man with the white horse“. According to a scholion to Apollonios of Rhodos, Leukippos was a Karian from Crete, a successor of Bellerophon. Drachms and further nominals from the time about 300 BC show Leukippos, riding right, attacking, wearing a helmet and cuirass, holding couched lance. This early impression of the Magnesia Hero show him rather peacefully, guiding or perhaps taming his horse, similar to early Euboian coins. Perhaps the taming of a wild, white horse was part of a lost Magnesian foundation legend…

The first coin I’d like to introduce is a Tetartemorion, minted in Magnesia on the Maeander, my favourite mint!  According to its style I assume the coin to minted at about 400 b.C. 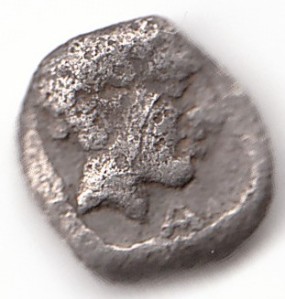 The obverse of the Tetartemorion

The male, youthful head on the obverse is usually interpreted as head of Apollon. Unfortunately its not clearly visible on the worn piece whether the God is wearing a laurel wreath. The avers shows a raging bull, runnig to the right, lowering his head. While the M is outside of the coin, the legend is red (M) A on the obvers, continuing G N H on the reverse, meaning MAGNEton in ancient greek. The term Magneton refers to second person genitiv, which means „of the Magnetians“ and declares the coin to be part of the official currency of the state of Magnesia on the Maeander.

The revers of the Tetartemorion

The buttin bull on the revers is a bit more challenging to interpret. Homer describes the river Skamandros, which rans through the territory of Troja, as a roaring, angry bull, rolling through the meadows of Ilion. For assuring the fertility of the Troian fields, the river was ennobled to a demigod, with an own cultus and own priest. Everywhere across the ancient greek world river gods were depicted as buttin bulls, sometimes with a bearded human face. Beeing symbolized as an attacking bull the personification of a river god also tells us about the fear of drought and crop failure: the small, dry summertime streamlets of Asia Minor have very few in commom with the watering, rolling rivers that the people longed for. After thunderstorms and snowmelt, during the winter month, the creeks are in fact transformed into torrentials rivers, whose power and speed for the ancient Greeks seemed to be only comparable with one of the most powerful animals of their time – the bull.

Same at Magnesia: the butting bull is the iconographic depiction of the personification of the Maeandros River. By displaying the rivergod on their coins, the Magnesians showed everybody the considerable local value of this deity and, by doing this, worshiped him. Introducing two major gods. a local river and the first letters of the City on hardly 0,24 inch – a remarkable message for such a small medium.